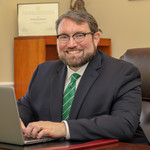 Timothy Johnson has previously worked with:

Mr. Johnson's familiarity with diverse practice areas and how they tend to play out in court benefits his clients as he is able to offer counsel regarding regulatory compliance and risk management.

All messages are received and reviewed exclusively by Timothy R. Johnson, Esq. He will strive to respond to you as soon as possible, but please allow up to 24 hours to respond. If the matter is urgent, be sure to call and if he does not pick up, leave a voicemail.

Thank you for contacting me. I will get back to you as soon as I can. All messages are received and reviewed exclusively by an attorney.

Please complete all required fields below.

Timothy R. Johnson will go over your legal needs and explain how you all will work toward the best outcome for you. Mr. Johnson is your Clarke County attorney based in Berryville, VA. Call today at 540-352-4672.